It’s been just about exactly a year. And as usual it’s gone by so fast. But it’s been a quite wonderful year. The year I woke up. The year I decided to quit wasting time, to get on with life, to tell the truth and to have fun. And now the next big thing NYDP 2012. See you soon!

Posted in I have no earthly idea | 5 Comments

Shave and a Hair Cut… 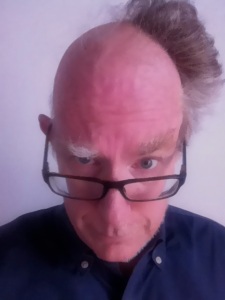 Well no shave. But the haircut is real, if a bit unorthodox. For the past six weeks more or less, I’ve been getting radiation therapy.

“Therapy”. It sounds so comforting….If you squint at  the word almost seems to whisper, “there…there…” And so many choices.

Radiation therapy. No choice here short of refusing treatment. And heck, it’s the most comforting of all. Lying on a platen—no cushion. Before they slip on the mesh polyester mask that presses into my skin and holds my forehead tight to my polycarbonate pillow, I put on a little lip goo. I check to make sure there’s no sneeze coming on. I rub my face all over in the hope that that one little spot at the end of my nose won’t start to itch. Then the mask. “Ready?” Snap, snap, snap, snap, snap. “Ok, Mr. Pierce. We’ll be right across the hall and can see you on the camera. Shake your legs in the air if you need anything. Seriously. They may as well say “Pretend you’re having a seizure, and we’ll come running.” Then they close the eight inch thick door that closes me into the “radiation theater”, and the business starts. Zap, zap, zap, zap, zap, zap and I’m free, free, free at last. For the day. But there’s the rest of the week. M T W TH F I’m walking into the hospital’s radiology basement at 7:45 am. OMG that’s early. At least for me.

But truly, I exaggerate. Annie gets up with me at 6:15. She makes me breakfast. Yes, breakfast. She is very very good to me. The techs are relaxed and clearly expert. They give me a nice warm blanket. They turn down the lights and the “music”. And now that we’ve all had a little practice, what took 90 minutes on the first day has dropped to less than ten. Sometimes I actually take a nap.

And I’m fine. Quite fine. I’ve had almost none of the potential side effects: nausea, dizziness, vomiting. Vomiting. That’s a nice thing to skip. Yes, I have a bit of “sun” burn, especially on my right ear (stage right). A special lotion—Calendula— soothes that.

The high-energy x-ray hair cut—the most expensive and time-consuming hair cut ever—has done its invisible job and created my only side effect, the right side of my skull has no hair. Unfortunately, it’s done nothing to diminish my ear and nose hair. The swoop on the other side could be cultivated into a comb-over or I could shave the whole thing, but as someone said recently, the shaved head is the comb-over of the millennium. So I’m trying to make it a fashion statement.

They won’t know if there’s any real effect for 6 to 18 months, after several more MRIs, but statistically, its predicted to have a positive effect. So once again. Hooray! Once again a very, very positive wait and see… That’s quite comforting. 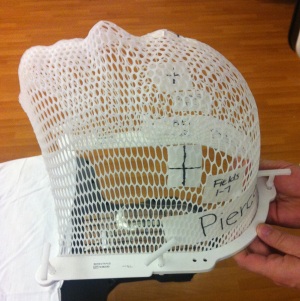 The first item on the prix fixe cancer menu for the next six weeks is a daily course of radiotherapy. Well, strictly speaking, I suppose radiotherapy is the main course. The first-day appetizer was a CT scan, some X-ray sauce, and a delicate waffle cone in the shape of a head. My head.

Radiation is dangerous. Bet you didn’t know that.

Ionizing radiation—alpha, beta, gamma, proton, x-rays, etc.—has caused quite a bit of the cancer in the world. END_OF_DOCUMENT_TOKEN_TO_BE_REPLACED

All Losses are Old Losses 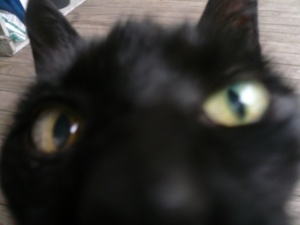 We lost a close and dear friend last Tuesday. She was a constant companion, a loyal confidant, cuddly, warm, and giving when she wasn’t being a bitch, a yeller especially in the middle of the night—”Where are you?” “I’m bored!”—, a film star, a water-lover, and a cat.

Her name was Squid. A cat so black she was almost impossible to photograph, she got her name at the end of an unproductive brainstorming session where we had decided just one thing, that the name “Inky” might make us throw up. Just at that moment, a friend called to ask if we had a recipe for an unusual pasta dish made with…ink from squid.

We moved into our current house (then a pile of bricks and old plaster) nineteen-and-a-half years ago. We had a cat—Agnes. She was sweet, quiet, unobtrusive, friendly. She would have been happy to have us to herself for the rest of time, but we fell prey to the propaganda: “Are you your cat’s only friend?” At the Anti-Cruelty Society, in the kitty room, Squid picked us to take her home but we didn’t know that until we had been enticed by her black beauty and charmed by her antics.

They say you should introduce the new cat to the old one slowly. Keep it locked in its own room for a while so they can get used to the smell of each other and come to understand that you (the territory) are going to be shared. They need to understand that they will exist on equal footing.

When we opened the door, Squid was the highly deferential second cat rolling on her back and showing the white spot on her shiny underbelly. That lasted about a day. Squid established her dominance specifically and severely. Quick claws, bared teeth, and a distinctive hiss informed Agnes that she was to sleep at the end of the bed if she got to be on the bed at all. Agnes was to lie touching Squid’s feet to keep them warm. Agnes was to wash Squid’s head and paws. Agnes could eat all the food she wanted, but only after she (Squid) was done. In other words, Squid was to be the glamour-puss and Agnes The Fat One.

Nearly everyone thought Squid was a boy with her Tom Cruise nose and tendency to stomp around and demand her due. How does a seven pound black cat stomp? She was a feet of nature.

Squid was nearly twenty years old when she finally kicked the kitty bucket.

After this long, privileged life and brief period of painless kidney failure, she died of a delicate but lethal injection as we watched her relax softly into gone-baby-gone. While the vet fetched a towel to wrap her in, we held her tiny, long, languid and still warm body cradled between us one last time.

As we walked to the bus headed for home, sharing the handle of a box that weighed almost as much as the body inside it, throats tight, tears streaming, Annie speculated that all losses are old losses. Maybe Squid is just a cat, but love is love and her death connects us to other loves and deaths we know—Annie’s mother, my dad—and to those we love but never faced like King and Lincoln, and even those we can anticipate. If deaths pile up, if bodies decompose but memories remain, then this death thing will just get harder as we age. It sure feels that way now.

This is almost totally off-topic, but there’s a hole in my head, and I couldn’t resist:

(thanks to Christine Esposito at Terracom)
Posted in I have no earthly idea, No. 10 – Have Fun | 2 Comments 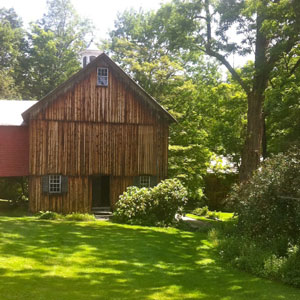 It’s Summer. And though it’s been way hot and muggy at times and though it feels like Fall right now, we’ve had some gorgeous days. Sunday evening was perfect. This is not hyperbole—seventy-three degrees, friends with us for dinner on the porch, our little solar lights strung overhead coming on as darkness fell. Organic chicken and sausages from the butcher down the street. Vegetable terrine. Big succulent tomatoes. Cucumber salad. Ripe figs with mascarpone. It was perfect.

Summer days are long and nights are short. I like that. I like the Summer heat even though I can’t stay long in the sun and do dislike swimming and watermelon’s not my favorite fruit and it’s sometimes it’s so humid the sheets stick.  END_OF_DOCUMENT_TOKEN_TO_BE_REPLACED

When I ran out of the house for work at 7:30 am ten years ago today, I knew nothin’ about nothin’ until Annie’s call – an aircraft had hit the World Trade Center. Twenty minutes later, the Loop was being evacuated. The sidewalks were packed with people. The subway was closed and the streets were clotted with traffic. But Chicago citizens were departing downtown by a variety of modes in a very orderly fashion. There was no panic, no stampedes perhaps because nothing had really happened here. It was all hearsay—understood, but not felt. The tragedy was so far away. END_OF_DOCUMENT_TOKEN_TO_BE_REPLACED

Posted in I have no earthly idea | 3 Comments

When all you have is a Hammer, Everything Looks like a Nail.

A few weeks ago I spent a good amount of time with Dr. Grimm, my neurooncologist. We were reviewing my most recent MRI which he said showed no signs of growth compared to the original December MRI. This is good and was the same conclusion he reached on the last MRI two months ago. Time to wait and see again. Again, no evidence that either radiation or chemotherapy have any impact on patient longevity. END_OF_DOCUMENT_TOKEN_TO_BE_REPLACED

And I Thought Plastic was supposed to be Bad

I’ve been reading a lot of books about the brain.

Twenty years ago the brain, its structure, and its functions were considered to be set in stone after about age ten. Yet even back then, they knew that up to age four, half of a child’s brain can be removed and he/she can nonetheless grow up to be a fully functional talking, walking, thinking adult. We know this because for certain severe and violent illnesses (like a stroke or developmental abnormalities), removing half the child’s brain was the only effective option, and still they thrived. END_OF_DOCUMENT_TOKEN_TO_BE_REPLACED

Posted in I have no earthly idea, No. 04 – ID Potential Treatments, No. 08 – Watch for Signs and Portents | 3 Comments

Went into the tunnel with the bright light at the end, and once analyzed the MRI showed nothing. This is good! Nothing means there is no tumor growth we will look again in 60 days

Posted in No. 03 – MRIs Ad infinitum, No. 08 – Watch for Signs and Portents | 4 Comments
There's a Hole in My Head
Blog at WordPress.com.
Loading Comments...
Comment
×